A summary by David Charles

Michel Bauwens, director of the P2P Foundation, starts the workshop by quoting anthropologist Alan Page Fiske. Fiske describes four basic ways of interacting around resources. The first is the gift economy, which is based around equality matching. The second is authority ranking, where what you get is relative to your rank. The third is market pricing, the dominant model in capitalist society. But the fourth is what interests us: communal shareholding, where an individual exchanges, not with another individual, but with a collective. This is the commons.

Because of the networks that we’re building on the internet, Michel believes that we’re beginning to put the commons at the heart of our economy. This new way of creating value, he says, is profoundly different to the usual capitalism. Firstly, it’s not based on labour; it’s based on contributions and, secondly, we’re not creating capital; we’re creating commons.

Michel outlines his ideal three-level structure for a functional commons economy. At the base is commoning itself, the creation of the commons or “peer production”. Next, Michel envisages the creation of cooperatives based on the commons, so that people can actually make a living. This is “peer property”. Overseeing both these levels, would be enabling institutions, so that cooperation can endure through time. This is “peer governance”. I would repeat that, unfortunately, this is Michel’s ideal, not yet the reality.

The reality is that, rather than cooperatives, the value of the commons is predominantly extracted by “for profit” companies. Facebook is Michel’s most extreme example of this. The value of the company comes almost entirely from volunteer contributors: its users. But Facebook Inc. extracts 100% of the value. Hypothetically, if Facebook had been happy with “only” the five billion dollars they asked for when they floated on the New York Stock Exchange instead of the sixteen billion they got, they could have paid over a hundred thousand contributors a hundred thousand dollars each. An extraordinary thought, especially when you consider that Facebook is now worth ten times that initial public offering. 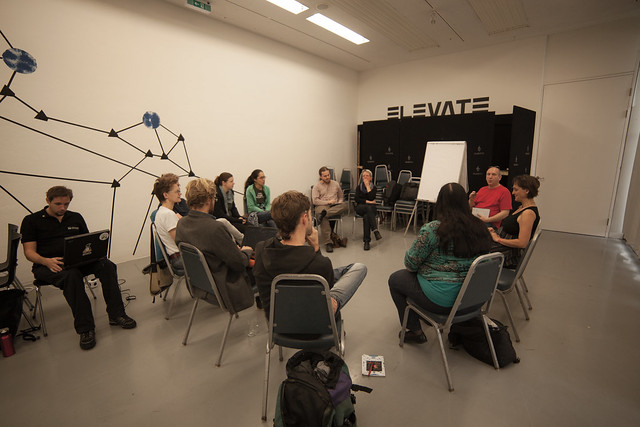 The problem with this current economic model is that most of the value created is not put back into the commons. This is what Michel calls the “value crisis”. Thanks to advances in technology, more and more people are able to create “use value” – by writing interesting blog posts, uploading funny videos or beautiful photographs – but, of that use value, only a marginal amount is being put on the market and, overwhelmingly, that marginal amount is captured by platforms such as Google, Facebook or Twitter. As Michel says, “The feedback loop between creation of value and distribution of value is not working.”

The P2P Foundation, of which Michel is director, aims to observe these emerging economic processes and ask: How do we transition to a system where we have a thriving economy based around shared resources?

Michel had the opportunity to explore this question in unprecedented depth when he was appointed director of the FLOK research team. FLOK is a research project at IAEN, the Ecuadorian university for public services, who were invited by the government of Ecuador to “fundamentally re-imagine” the country, based on the principles of the commons. This extraordinary opportunity emerged from Ecuador’s five-year strategic plan published in 2009 called the “Plan of Good Living”.

“Ecuador is a new colonial economy that depends on extractive exports: bananas, oil, agriculture,” Michel explains. These are, however, low margin profit items and Ecuador is forced to import high margin goods, such as information technology, from the west. “Part of this problem is intellectual property rights,” Michel says. “The Chinese manufacturers make three percent profit on the iPhone, but Apple make seventy percent profit.” These high margins keep developing countries like Ecuador in a state of dependence.

Thanks to intellectual property protections, such as those covering iPhone technology, knowledge is largely privatised. One direct consequence of this is that there are only three science labs in Quito. A patent-protected microscope costs six thousand dollars. According to Michel, however, we could build an open source microscope for only six hundred. “If there was a commons,” Michel says, “you could have thirty science labs in Quito.” These sorts of open hardware projects are already happening, at L’Atelier Paysan and Farmhack for instance, but we need to scale up.

Intellectual property rights are antithetical to the knowledge commons, but are one of the foundations of capitalism. So any transition away from dependence on patent or copyright protected products would be a radical, if not revolutionary proposition. That radicalism derailed the FLOK project. Although Michel had been invited into the country by the government, who had promised to sign any conventions that came out of the process, it was obvious that there were many powerful interests who did not want FLOK to be a success.

Michel is proud of the participatory FLOK process, however. They held twenty-four workshops in the twenty-four provinces of Ecuador, using Augusto Boal’s “theatre of the oppressed” methodology, covering topics such as the high price of medicine and “terminator” seeds. These workshops were aimed at common citizens, to elicit their reactions. FLOK also held conversations with around seventy organisations, including indigenous farmers, a Linux usergroup and a 3D printing hacker space.

“On the basis of this input, we created the first proposals,” Michel says. They ended up with eighteen legislative proposals, covering topics such as biodiversity and open hardware. They took these to the government. After three days of discussions, the government refused to sign the conventions. “The reality is we were not paid for three months,” Michel says. “Clearly a number of people didn’t want us there. The president of the country didn’t even know what we were doing.”

Despite this failure, the project was still a success in terms of developing a commons transition plan, which can now be acted upon by anyone interested in transitioning to a commons-based society.

One limitation of the FLOK project in Ecuador was that it was only about the knowledge commons. In addition to knowledge, Michel counts three other “fake commodities”: land, labour and money, making four commons in total. We need to ask the question, how would land, labour and money function if they were commons, not commodities? Through answering questions like these, Michel aims to create a culture of commons policy-making. “We want to politicise the commons,” he says, warning us that this isn’t some fancy theorising, but a pressing need to protect ourselves from the aggression of capitalism.

The welfare state is an achievement bequeathed to us from the politicisation of labour in the last century. “This is structurally dissolving in the west,” Michel warns. “All our achievements based on labour are in danger and are being dismantled as we speak.” Michel’s solution is this politicisation of the commons. “If you want a new narrative,” Michel says, “you need to start thinking about the commons, of which labour is a part.”
Michel defines commons structures according to two axes. On one axis is who has control of the commons, ranging from totally centralised to totally distributed. On the other axis is about what happens to the end product of the commons: Is it for private profit or for community benefit?

Facebook is an example of a centralised and for profit commons. “Facebook extracts capital from our exchange, from our human cooperation,” Michel says. “You could argue that capitalism is moving towards letting us do the work and extracting from our exchange.”

Bitcoin is an example of a distributed and for profit commons. According to Michel, ninety percent of Bitcoin is not used for exchange, it’s hoarded. “It’s the anarcho-capitalist dream,” he says.

Local community benefit farming is an example of a distributed and for benefit commons. This is preferable to the two above structures, but Michel thinks this is not enough. He prefers the centralised and for benefit commons, on a global scale. We have states, multinationals and NGOs that operate on a global scale, but no body that represents the commons. “Make it locally, organise globally,” Michel says. 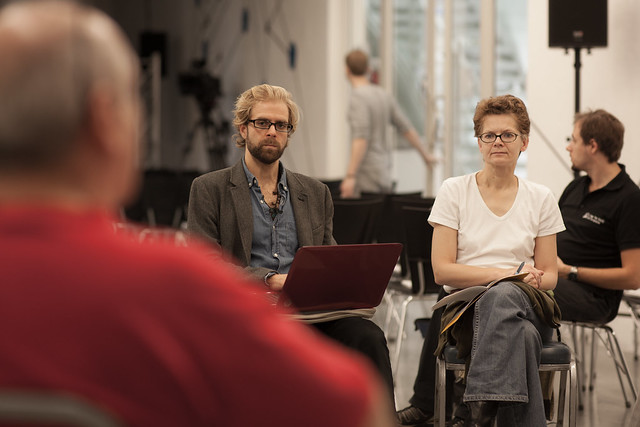 The reason why we need a global organisational structure for the commons comes down to the realities of putting food on the table. “The key problem working in the commons is it’s easy to volunteer,” Michel says. “But after a few years, you have a choice of either going back to a hierarchy or you try to make a living on your own.” But how can individuals profit from their work contributing to the commons when, by definition, it is a commons? “You cannot commodify your commons,” Michel says. “If you asked YouTube to pay you, you wouldn’t be making commons, you’d be making commodities.”

This problem could be partially solved by cooperatives using an open value accounting system, like Sensorica. Sensorica allows people to log their contributions to the cooperative and received in return a “karma score”. If anyone in the cooperative wins a contract off the back of the commons, the money earned from that contract would flow back to all members according to their “karma score”, not just to the person who won the contract. This is a way of ensuring that all effort is rewarded fairly, even before there is any financial return on that effort.

But there are more fundamental reasons why we need a global organisation for the commons: capitalism simply doesn’t recognise “externalities”. This could be anything from pollution that kills fish in the sea to the cost of bad working conditions to the national health service. “If it’s legal, it’s okay,” Michel says of capitalism. “We want an economy that recognises externalities.”

Michel’s answer is a reciprocity licence for businesses that do commons production. He explains: “Everybody with a common good orientation can use our commons. Every not for profit and every for profit who contributes can also use the commons. But for profit businesses who don’t contribute have to buy a licence.” This licence embeds the concept of reciprocity. “It’s still a market, but it’s not a capitalist market.”

Michel finishes by introducing an alternative market that already exists: the Catalan Integral Cooperative (CIC). Their ideology is: Everything they can do outside the capitalist market, they will do outside. They only use the capitalist market as a last resort. “They try to create a cooperative circular economy,” Michel says, “which also creates a commons, because everything they do is open.”

For example, CIC pay the bare minimum amount of taxes to the Spanish state. “They don’t recognise the legitimacy of the Spanish state,” Michel explains, “but they realise its reality.” Instead, they have an internal tax system with social and environmental characteristics. This “tax” is shuffled around between internal departments; they operate, ironically enough, exactly like a multinational corporation in this regard. This “tax” is re-invested into the community, healthcare, food, shelter and support. Over eight hundred freelancers work inside this system and are “taxed” by CIC. Now CIC are trying to demonetise their internal economy.

Michel’s dream is for a global community of commons contributors, bound together by a social charter, using open book accounting and an open supply chain, to create a global economic system that is both outside of the capitalist market and outside state planning.

This is the commons.

Originally published in davidcharles.info. Please check out David’s blog and his book on Elevate # 10, from which this summary was extracted and consider donating to his project.