We’re All In This Together: The Commons, the Collaborative Economies and the Digital Communities features a series of interviews with attendees to the Commons Collaborative Economies event, Procomuns, in Barcelona, Spain, March 2016. Produced by the P2P Foundation, it was originally recorded as a submission for the the 2016 Golden Nica for Digital Communities from Prix Ars Electronica (which it won) the film explores different views about digital and offline collaborative communities in the commons context.

The opportunity to gather at an event is often treated as a special occasion among people more accustomed to collaborating online in “digital communities”. We wondered what others had to say about the distinctions between concentrated events and the regular, more decentralized ways we interact and collaborate online (not meaning “decentralized” to describe the state of the tools or the internet, but simply that we ourselves organize online in decentralized ways). Our interviewees were full of surprises and serendipity.

Below is the text by Ann Marie Utratel that accompanied the video submission for the Prix Ars award:

On the morning of Sunday, March 13, 2016, I was at home in Madrid, Spain. At the same time, northeast of here in Barcelona, many of my colleagues in the P2Pvalue project – of which the P2P Foundation is a project partner – were attending an event called “Procomuns – Commons Collaborative Economies”.

The event was chiefly organized by the project partner based in Barcelona, but all partners had a hand in making the event an extraordinary success. Here’s the thing – I wasn’t able to attend (family reasons), but my husband was there. His name is Stacco Troncoso and he’s the strategic director of the P2P Foundation. I’m Ann Marie Utratel, handling communications for the Foundation – and this video is a result of the way we live and work, online and offline. 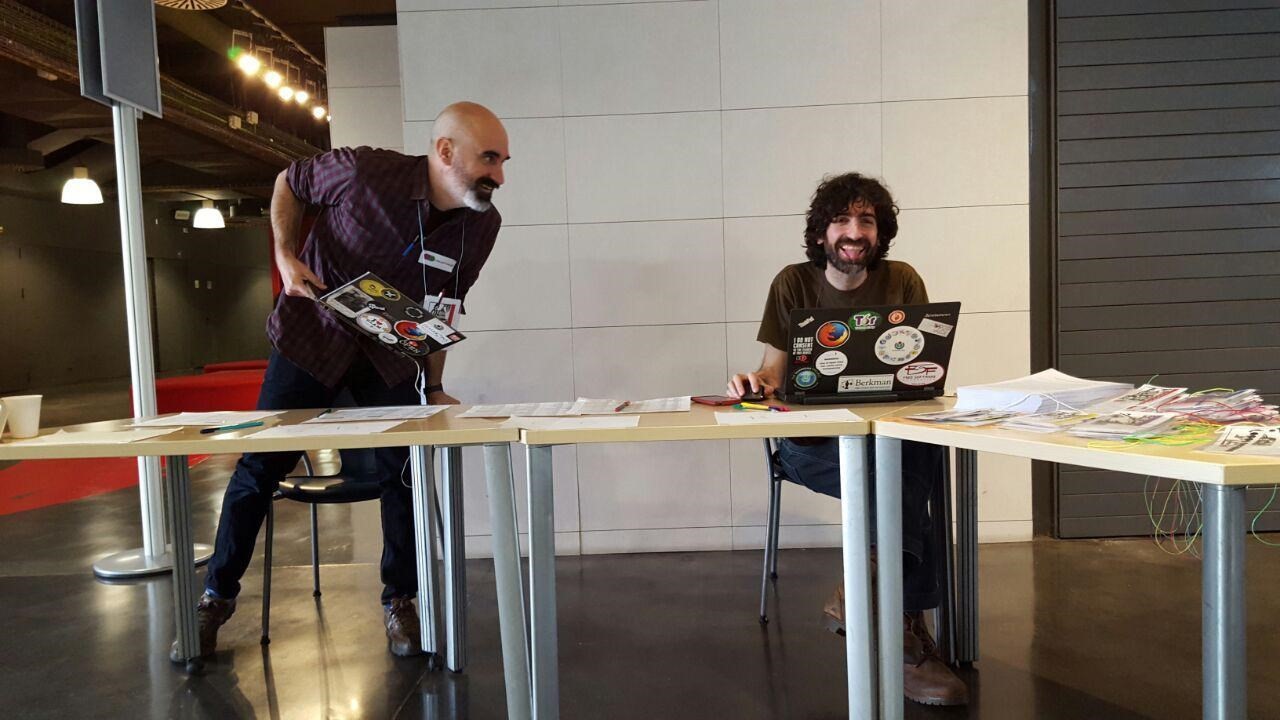 Our principal duty in the P2Pvalue project is dissemination through our vast digital community network. So, Sunday morning, I sat at my laptop with my Telegram chats and Slack channels open, Tweetdeck set up so I could retweet interesting things on any of the 7 Twitter accounts we manage, and the livestream videos of the event running. Stacco and other friends and colleagues were sending me photos via Telegram, and I was managing social media, uploading photos to Wikimedia Commons, and having an experience I’d never had before – total digital immersion in a live event where I was not physically present. Talk about remote participation.

Because of the livestream, I could see and hear a lot of familiar cues and ambience that are lost in still photos and staged videos. But there were many things I was missing: the conversations that happen when people get tired of speeches and workshops; the sound of the street outside when stepping out for air; the feeling of anticipation or concentration when some especially interesting speaker is on stage, or talking in the open spaces. 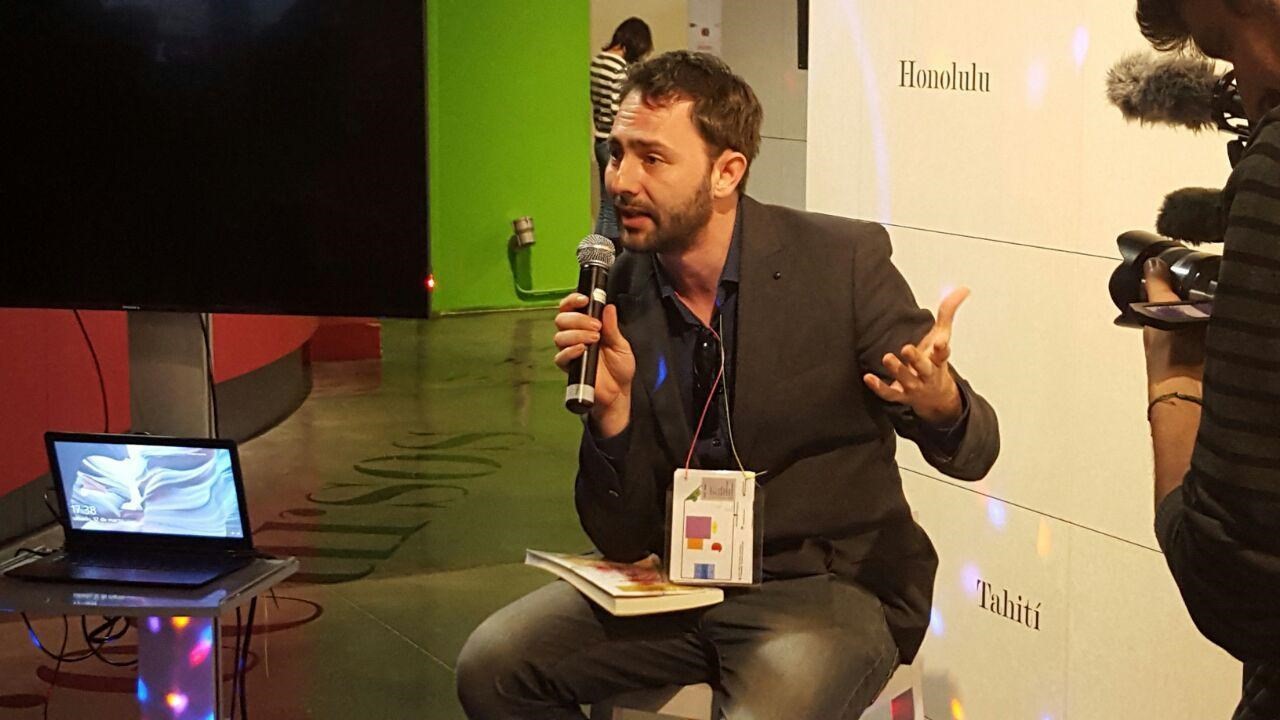 This event had a particular focus:

“Commons Collaborative Economies: Policies, Technologies and City for the People is an encounter which aims to highlight the relevance of the commons-oriented approach of peer production and collaborative economy, while proposing public policies and providing technical guidelines to build software platforms for collaborative communities”.

The local city administration was present, as the interest in Commons/P2P methods and policy proposals has been rising with the current political changes happening in Spain, along with the attention drawn by the so-called “sharing” economy, and its counterbalancing force lately called the “collaborative economy”. The event’s aim was:

“…to discuss the potential and the challenges of the collaborative economy, but also to define public policies that could help to promote the ‘Commons side’ of the collaborative economy. During the event we will be working together on a series of proposals and policy recommendations for governments, ending in a joint statement of public policies for the collaborative economy. In particular, we will address them to the Barcelona City Council and to the European Commission. In terms of Barcelona, the goal is to submit specific measures to the Municipal Action Plan of the city, alongside joining the participation process that has been enabled online.” (complete online text here, including European level policy proposals). 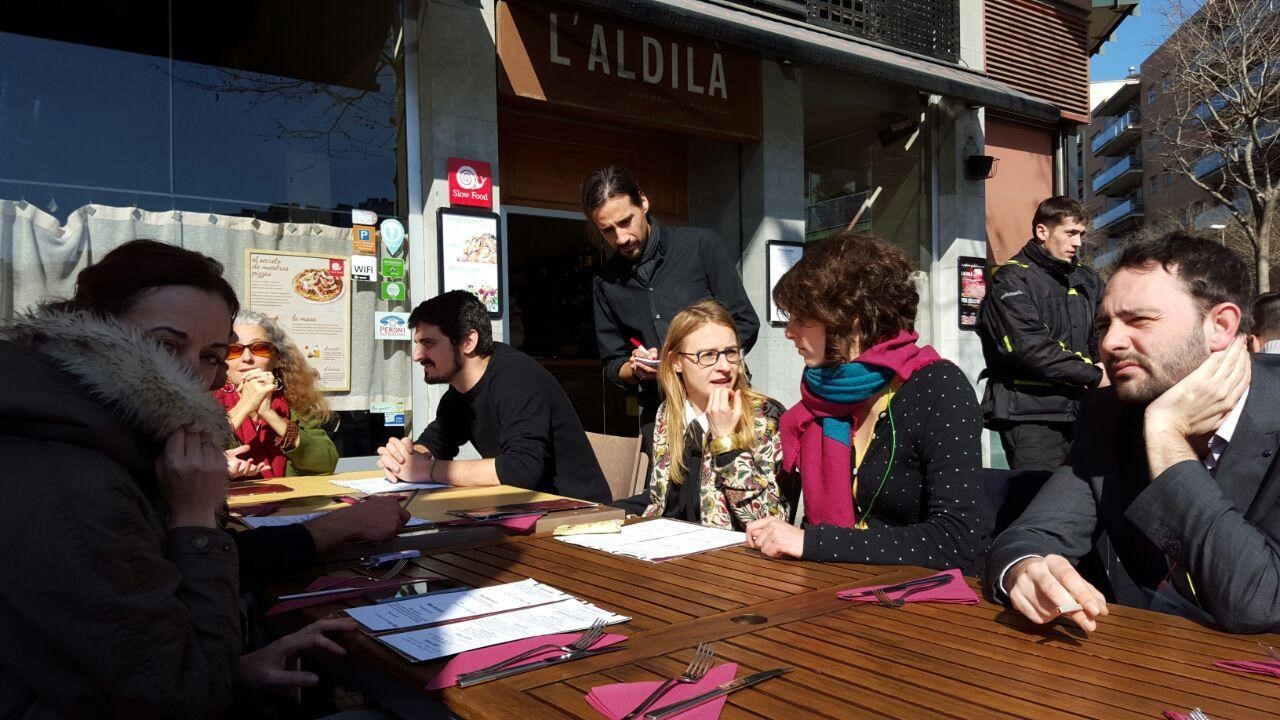 Friends and colleagues gathered for lunchtime – where the good conversations happen

Let me get to the best part – the people. In attendance were roughly 400 people from 4 continents, and about 40% were women. The participants page on the site showed that we’d succeeded in avoiding the dreaded “all–male panel” awards. There were families with little kids. This event was just about ideal in terms of showing that it’s possible to bring a wide range of people who normally interact online into “the real world”, and accommodate some of their expectations of balanced representation, and even a few of their often overlooked real-world needs – like childcare. 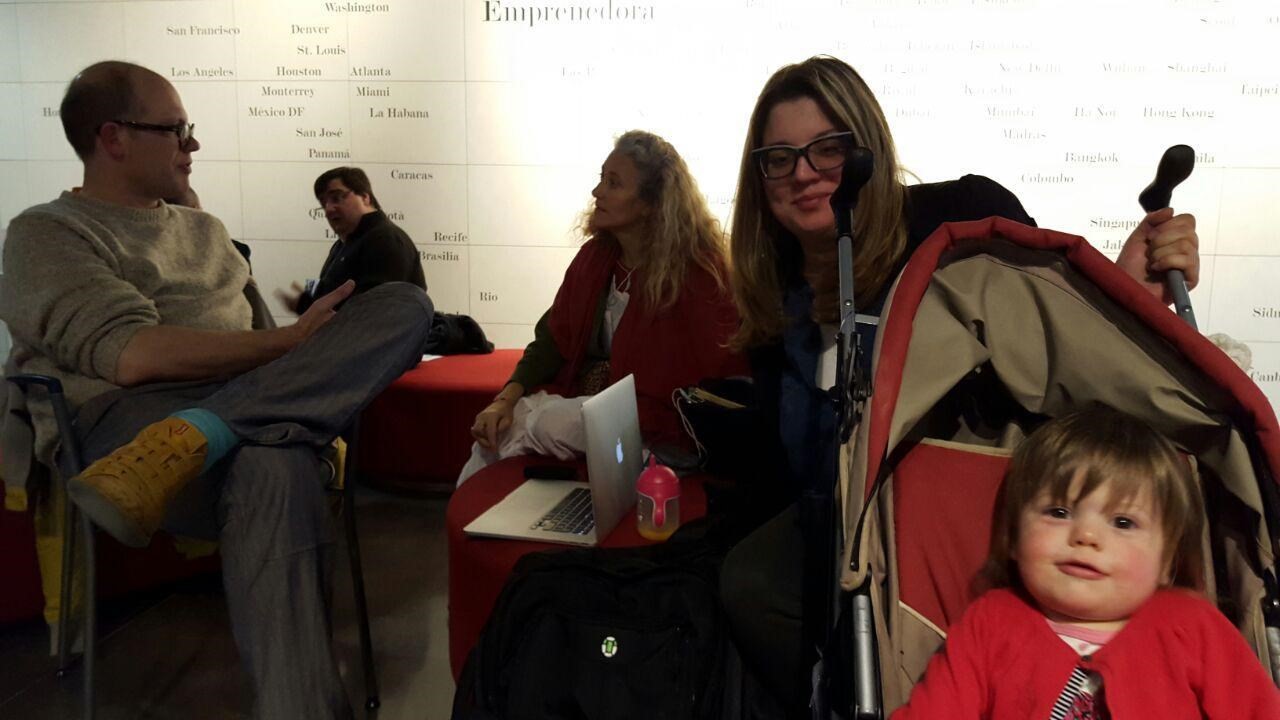 But I wasn’t there! I was missing the vibe, the spirit of those introductions to people I’d always wanted to meet, the surprises of finding out “who we have in common”, all of the serendipity that comes alive at a conference. To try and capture some of that magic, I asked Stacco (via chat) if he and P2P Foundation researcher George Dafermos (on camera as an interviewer in the video) could catch a few people on the fly and ask them two questions that would get them talking about the digital and “real world” communities: whether there’s a difference between these, and how events and online activities interrelate.

The result is this video from a dozen short smartphone recorded interviews sent to me, which I edited and captioned into a neat 30-minute short of conversations. I love the way the feeling of the event comes through, and how everyone seems to agree – the digital community is very human, and these events are like special occasions to enjoy for the gift of finally meeting online friends for the first time, or reuniting with colleagues you haven’t seen in ages. In this very unique case, the online interactions were incorporated into the fiber of the event, with participants being able to contribute to a landmark occasion in co-created policy recommendations towards a better society. A pioneer of the peer-to-peer movement lays the conceptual foundations of a production...